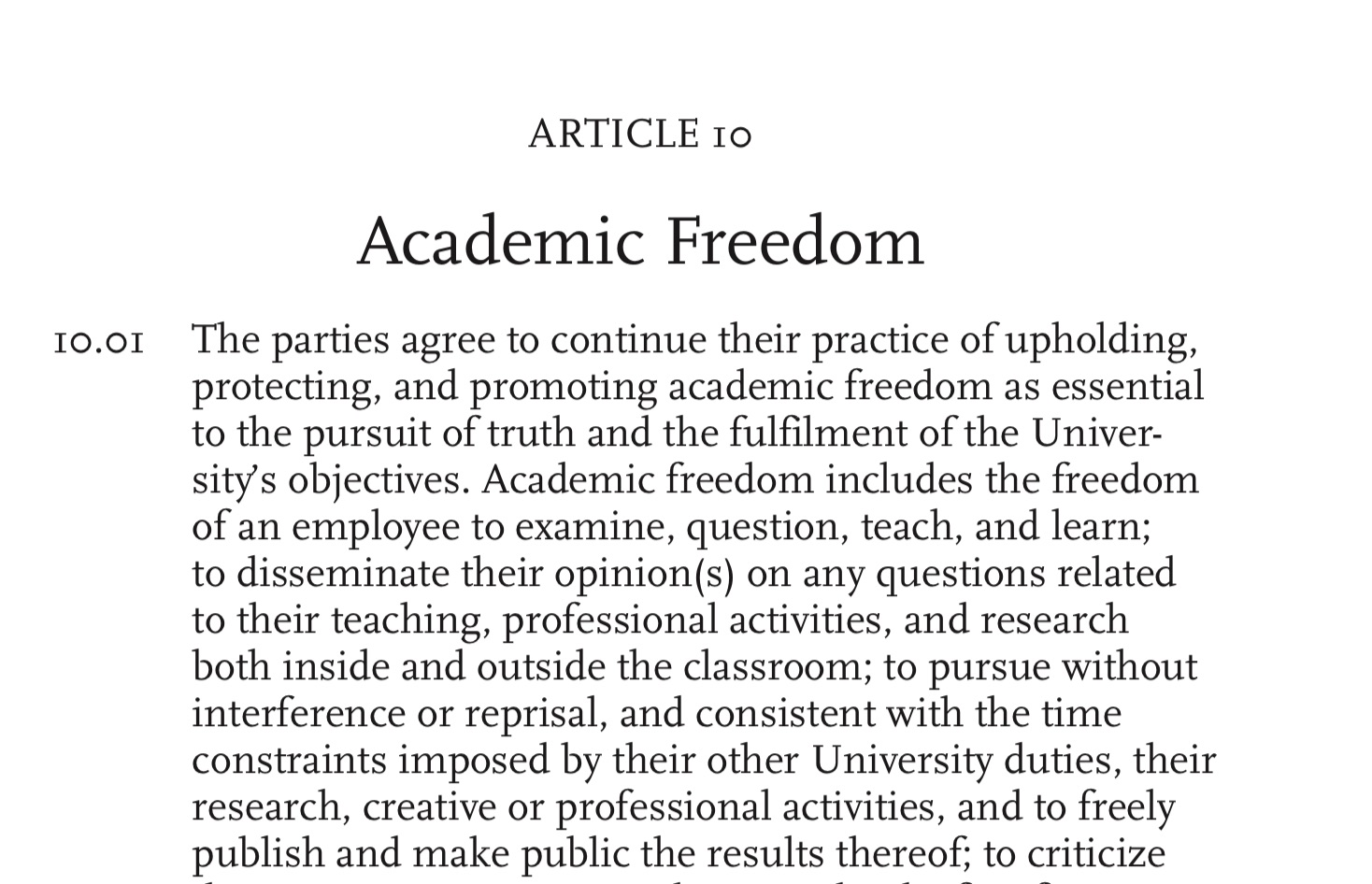 At its meeting on July 16, 2020, the YUFA Executive Committee voted to endorse the statement, "Cromwell Report and Related Matter involving Prof. Bhabha," which the Executive Committee of the Osgoode Hall Faculty Association (OHFA) issued on July 8, 2020. Drawing on YUFA's June 29, 2020 statement, "YUFA flags academic freedom concerns in Cromwell Report," OHFA's statement expands it to draw attention to the targeting of our Osgoode Hall colleague, Prof. Faisal Bhabha, by an Israel advocacy group.

YUFA's Executive endorses the OHFA statement as a gesture of solidarity with Prof. Bhabha and condemns the attack on his academic freedom. We also support OHFA's demand that President Lenton publicly reject this attack and defend the academic freedom of all colleagues at York University:

"On the grounds of both university autonomy and academic freedom, such interference by outside bodies must be resisted in no uncertain terms. We call upon President Lenton to reply to this attack on our colleague in the strongest possible terms, and to release her reply publicly. This episode is a reminder of the perils associated with the adoption of the IHRA definition of anti-Semitism."

The OHFA statement is below.

The following message is from the OHFA Executive:

On November 20, 2019, a student-sponsored event in Vari Hall featuring speakers from the Israeli military led to confrontations involving a number of (internal and external) groups seeking to have their views heard on the Israel-Palestine conflict. In the wake of this event, the administration commissioned an inquiry by former Supreme Court Justice Thomas A. Cromwell who was asked to address several issues of security and expression related to campus events.

One part of the Cromwell mandate was to examine "the University's policies governing freedom of speech on campus." This part of his report is of particular interest to OHFA, given that academic freedom is protected by Article 11 of the OHFA Collective Agreement.

As part of his general recommendation that "the University should develop a clear policy framework defining what constitutes racism, harassment and discrimination, particularly in relation to extra-curricular activities and conduct by student groups," Mr. Cromwell noted that several organizations had urged the adoption of the International Holocaust Remembrance Association's (IHRA) working definition of anti-Semitism. At p. 46 he observed that draft legislation was before the Ontario legislature that, if enacted, would add this definition to the province's Legislation Act; and further, that the University "should monitor the progress of this legislation and also consider the IHRA's Working Definition as it develops its own statement on racism and discrimination."

The IHRA working definition has been linked to a lobbying effort calling on governments, universities and other bodies to condemn and even to prohibit criticisms of the state of Israel as dangerous expressions of anti-Semitism. The OHFA Executive opposes anti-Semitism and all forms of racism and hatred. We view the adoption of the IHRA definition as a potential threat to academic freedom in that it could be used to restrict the academic freedom of teachers and scholars who have developed critical perspectives on the policies and practices of the state of Israel.

No university in Canada has adopted the IHRA working definition, and a number of problems associated with it in the Canadian context are reviewed in a recent opinion piece in University Affairs.

We therefore call on President Lenton to decline to promote the adoption of any definition of anti-Semitism or racism, including this one, that can be used to suppress academic freedom. Moreover, prior to adopting any statement on racism and discrimination that could have implications for academic freedom and expression, OHFA calls on the York administration to ensure that OHFA and other groups potentially affected be given the opportunity to participate in meaningful consultations.

We also wish to draw attention to a related matter involving our colleague Faisal Bhabha. On June 10, 2020, Prof. Bhabha participated in an online event organized by the Centre for Free Expression at Ryerson University, co- sponsored by the Canadian Civil Liberties Association, at which the IHRA definition was debated; the video is available here. On June 23, the Israel advocacy organization B'nai Brith wrote to President Rhonda Lenton demanding that Prof. Bhabha be prohibited from teaching courses in human rights as a result of the views expressed during the Ryerson event. The letter and petition can be found here. On the grounds of both university autonomy and academic freedom, such interference by outside bodies must be resisted in no uncertain terms. We call upon President Lenton to reply to this attack on our colleague in the strongest possible terms, and to release her reply publicly. This episode is a reminder of the perils associated with the adoption of the IHRA definition of anti-Semitism.