The past five years have seen aggressive attacks on the provision of post-secondary education in the province of Ontario. These attacks have occurred in the context of a disturbing but durable statistic: as a consequence of both Liberal and Conservative provincial policies, Ontario continues to provide the lowest per student funding for higher education in all of Canada. If it is possible to drop from lowest to lower, that is what has occurred. Government funding of Canadian universities in 1982 comprised 82.7 per cent of university operating revenues; by 2012, that percentage went down to 54.9 per cent. By 2019, in Ontario, universities’ receipt of government grants represented a paltry 24 per cent of total university revenues. Currently, Ontario university students have the highest student-to-faculty ratio (31:1) in Canada, compared to a national average of 22:1. [See OCUFA's 2019 pre-budget submission]

Recent attacks on higher education include substantial budget reductions, cuts to Ontario Students’ Assistance Program, the 1% freeze on faculty and staff wages, and little or no job security for contract and precarious workers employed by Universities. While progressive nations across the world are instituting or advocating for tuition free university for undergraduate students, our province continues to expand the share of university budgets reaped from ever rising tuitions, especially from international students, whose tuition has NOT been frozen, and who are forced to subsidize the budget shortfalls created by our government. Many college and university students face significant debt with no guarantee of a decent job.

The gutting of the university sector across the province must be met with a strong response from university students, colleagues, and communities. We must not allow any provincial government to further erode universities build over centuries in the province of Ontario.

We ask YUFA members to vote for a government that will ensure better working conditions for university colleagues and contract faculty and adequate compensation for their work. We join with our public servant counterparts to demand the Repeal of Bill 124 which our Employer used to depress the salaries of hard-working colleagues in the last round of contract negotiations. We ask members to vote for leadership that will disband the misguided performance-based funding model for universities in Ontario. This model has produced disastrous results in the UK, where hundreds of eminent faculty members have been terminated and world renowned programs and departments dissolved, much as occurred recently with the “bankruptcy” and restructuring of Laurentian University in Ontario.

It is critical that the next provincial legislature support the primary aims of higher education: to provide a post-secondary education for new generations of scholars; to prepare them to navigate pathways of work and career; and to enrich their contributions to public good in the context of uncertain futures. York University alumni and colleagues are key leaders in some parties and can bring our commitments to equity and social justice to the next elected legislature. We can be a force for lasting change in a province that renews its commitment to social infrastructures and public good. We ask you to vote (if you are in the York riding of Humber River-Black Creek, vote for incumbent Tom Rakocevic, who supports public education) and to mobilize your students and colleagues to vote for a government that shows a strong and actioned commitment to renewing higher education in Ontario 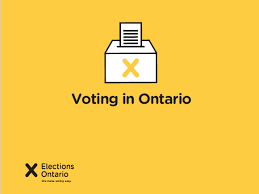