FAQ regarding a possible labour disruption by CUPE 3903 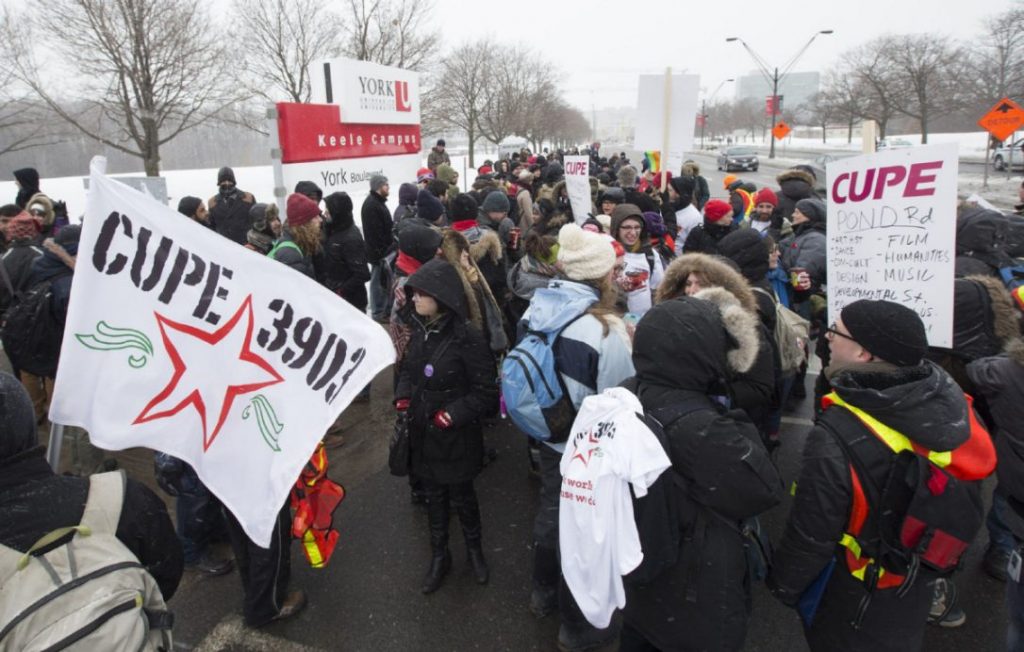 Members of CUPE 3903 picket the Main Gate of the York University campus during the 2015 strike. (photo credit: Bernard Weil)

CUPE 3903 has announced a strike date of March 5, 2018 should negotiations fail with the University administration. The purpose of this document is to answer some frequently asked questions about how a possible labour disruption would affect YUFA members.

1. Will classes continue if there is a labour disruption?

In the 2015 strike by CUPE 3903, the Senate Executive Committee decided to suspend all courses for the initial period of the strike (with a limited number of exceptions) and they did so pursuant to their responsibility for safeguarding the principles of academic integrity and fairness to students under the Senate policies related to disruptions: see #70 and #76. We expect that a similar decision will be made this time, but Senate Executive has yet to make any announcement. In 2015, after the initial blanket suspension of classes was lifted, Senate Executive affirmed that individual instructors were responsible for deciding whether their own classes should resume (following the principles of academic integrity). There has been no indication that this principle has changed.

The Provost has sent a notice to the community saying that “all classes that can continue will continue.” This statement has generated controversy in the York community since Senate policy is clear that announcements and decisions about the continuation or cancellation of courses are the responsibility of Senate and Senate Executive, and it appears to conflict with the policy from the 2015 CUPE 3903 strike. In either case, Senate rules protect students from penalties and guarantee accommodation to them for work they do not complete or classes they do not attend during the strike.

2. Can I be asked to take on additional teaching or other responsibilities during a strike?

The workload provisions of the Collective Agreement will continue to be in force, so faculty members should not experience an increase in workload due to a strike. Faculty members are responsible for their own courses, not for those of their colleagues; and YUFA members cannot be required to take up the work of another bargaining unit. Faculty members are also not responsible for carrying out the work previously assigned to Teaching Assistants or Marker/Graders in their courses. As in previous labour disruptions, YUFA will seek to protect members from extra work arising from remediation after the strike (or seek to assure members are appropriately compensated).

3. What are my rights as a faculty member during a strike?

Should a Dean or Principal tell you to alter your course and grading requirements as a result of a labour disruption, you are likely within your rights to refuse such a request on grounds of Academic Freedom (Article 10 of the YUFA Collective Agreement) and previous Senate guidance about the primacy of the instructor’s role in deciding how to safeguard the academic integrity of their courses. The Senate policy states that academic integrity will be protected and academic standards shall not be diluted. YUFA will defend any member subjected to discipline for exercising their collective agreement rights.

4. Do I have to cross the picket line if a strike is called?

YUFA is not on strike and the Association cannot advise members to withdraw their labour. However, YUFA will vigorously defend any member subject to discipline for refusing to cross a picket line for legitimate health and safety concerns or being unable to walk from a transit drop-off point to come to campus; carrying out professional responsibilities in off-campus locations or using alternatives that preserve academic integrity of their courses; or refusing to do the work of a striking CUPE 3903 member (or any other employee who does not perform their work because of a strike). YUFA members may wish to consider holding meetings off-campus to enable others to attend without crossing picket lines. YUFA staff will not cross any picket line and staff will assist in scheduling meetings with YUFA members off-campus.

5. What has YUFA been doing in the face of a potential labour disruption?

As part of the York Cross-Campus Alliance (CCA), YUFA has been urging the Employer to negotiate a fair and equitable settlement in its negotiations with CUPE 3903 in order to avoid a strike. We have called upon the Senate Executive to suspend classes in the event of a strike due to the impossibility of maintaining academic integrity with so many instructors absent from class. YUFA is concerned that, if the Senate Executive fails to cancel classes, it may compromise the academic integrity of courses and research, could lead to increased workload for faculty members, or potentially present health and safety concerns.

6. My students have been asking me about a possible strike. What should I tell them?

We recommend that faculty members inform students of their rights which are clearly spelled out in the Senate policy on labour disruptions. The thrust of the policy is that students cannot be academically or otherwise penalized if they are unwilling or unable to participate in courses owing to the labour disruption. Recent notices by the senior administration about a possible strike have curiously avoided mention of this policy. You can also inform your students that, should academic activities be suspended, all classes, labs, and tutorials will be cancelled. They should watch for announcements. After a strike has ended, the Senate will determine protocols and remediation procedures for the return of students to the classroom and the completion of work.

You may wish to use the strike as a “teaching moment” to show students the nature of precarious employment many of their instructors face on a daily basis, and impacts on the quality of education. You may also let your students know that they can contact the President, Provost, and Vice-President Finance and Administration to urge them to improve the Employer’s offer as the best way to avoid a strike.

7. How can I express my support for CUPE 3903 members on strike?

You can support solidarity efforts with CUPE 3903 members in the following ways:

YUFA is a member of the York Cross-Campus Alliance (CCA), a collection of unions and student groups on campus, which is engaged in collective action to improve the working and learning conditions at York. Support for the CCA is another way to express solidarity with 3903 members.

If you have any questions on any matter related to the impact of a CUPE 3903 strike on your rights and responsibilities, please email YUFA at [email protected].