It's time for McMaster University to agree to a fair contract. Solidarity with CUPE 3906 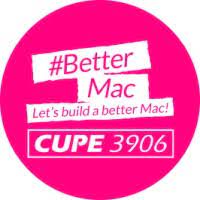 The York University Faculty Association expresses its solidarity with members of the Canadian Union of Public Employees, Local 3906. The union, representing over 300 contract faculty members who deliver frontline instruction at McMaster University, is seeking improvements to job security, training, wages, and retirement security. After a year of contract renewal negotiations, CUPE 3903 will be in a strike/lockout position as of July 22, 2022.

YUFA similarly experienced difficult and protracted negotiations during its last round of bargaining. York University senior administration obstinately refused to make meaningful movements until the eleventh hour. These stall tactics on the part of the employer create unnecessary hardship and instability for students.

To show your support for CUPE 3906, sign on to this letter.